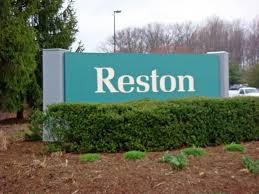 Reston, Virginia is located in Fairfax County VA about 25 miles from Washington, DC. It’s become Fairfax County’s most populous community with an estimated population of 62,000+.  Founded in 1964, this community is an internationally known, large-scale, master-planned community, the first in the United States. Real estate in Reston, Virginia spans a wide variety of types, ages and styles. Reston has evolved into a vibrant community with lots to choose from for the buyer and numerous buyers looking to move there for the sellers. Below you’ll find homes listed for sale in Reston.

homes in RESTON are in DISTINCT VILLAGES

Creating distinct villages, each with a theme and organized around a neighborhood shopping center within a half mile walking distance, was Simon’s plan.  Lake Anne Village was the first of those with a concentration of townhomes to save of the open spaces.  One of those original concepts was a zoning that restricted retail establishments to local proprietors, this has created a popular attraction in the Reston area. Hunters Woods was the next village that was designed. The Reston National Golf Course is within the Hunters Woods village along with the sought-after elementary school, Hunters Woods Magnet School.  The village of South Lakes contains two large lakes; Audubon Lake and Thoreau Lake.  This beautiful, active community is centered around and on the lakes.  Tall Oaks is the smallest of all of the villages.  It is a very quiet, peaceful community.  The last and final village to be developed was North Point.  One of Reston’s most sought-after neighborhoods with its newest and largest homes in a spectacular wooded setting. 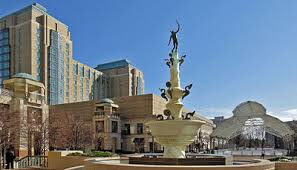 The Reston Town Center is located six miles east of Washington Dulles International Airport and 21 miles west of Washington, DC.  It is home to many businesses, with high-rise and low-rise commercial buildings comprises over 1,000,000 square feet of office space. The headquarters of Rolls-Royce North America and ComScore are also located in Town Center, along with a Federal Service office of Google.  Reston Town center’s “downtown” is home to more than 50 retail shops, 30 restaurants, offices, a 13-screen cinema, and a Hyatt Regency Hotel.  The Pavilion is their venue which hosts numerous concerts, festivals and cultural events throughout the year and doubles as a covered open-air ice rink during the winter.

“LIVE, WORK, PLAY AND GET INVOLVED” in reston neighborhoods

One third of Reston’s residents live and work within the area with an estimated median household income of $103,563.  With scientific, technical and  professional services being the largest economic activity in Reston, offering 757 different companies employing approximately 21,575 people.  The Information sector follows second with 150 companies employing as estimated 9,876.  Reston is home to the headquarters of one Fortune 500 corporation out of ten in the Washington, D.C. area.   It is also home to the the National Wildlife Federation, United States Geological Survey, the American College of Radiology and Corporation for National Research Initiatives.  With extensive planned miles of pathways connecting people to places, it is encouraged to walk, jog or bike to work.

Reston Association is ran by a nine member Board of Directors which is supported by a per-household fee for all residential property owners. Maintaining the over 1,300 acres of open space and their recreation facilities which include 49 tennis courts, four lakes, 15 outdoor pools and 72-acre Walker Nature Center Sanctuary.  They also manage the design and maintenance covenants that keep Reston always looking its best. They are a dedicated team committed to ensuring that Reston continues to be one of the best places to “Live, Work, Play and Get Involved!”

Reston still embodies its founding principles of “Live, Work, Play and Get Involved.” Reston’s name is derived from the initials of developer/entrepreneur Robert E. Simon (RESton). With proceeds from his family’s sale of Carnegie Hall, Simon purchased the land on which Reston was built, hiring a team of architects and city planners to help him create his vision of the ideal American town.

Reston was developed with deliberate mixes of living, employment and recreation spaces creating an environment that is very desirable.  Rated by CNN Money Magazine as one of the best places to live in America, #7 in 2012 and #10 in 2014, Reston is really a great place to call home!

Find Out How Much Your Reston VA House Is Worth